The story of Fatalii Gourmet Naga Morich starts in early 2006 when I got the first seeds for this variety,
which still is one of the most scared chile peppers in the world.It has also gained very good reputation because of it's fantastic aroma.

Naga Morich originates from Nagaland, a state in north-eastern part of India. Naga tribe showing off in Nagaland. Locals respect Naga Morich pods much more than western people do.
Why is that, you might ask? Because they are already familiar with that variety.
They learned from their mistakes as we are still learning… The classic Fatalii Gourmet "Naga face" was created from this picture.
This picture was taken in a real life situation, meaning that this dude actually ate Naga Morich in a very hot and humid greenhouse.
This was one of the little things that drove our company into direction of always using authentic situations and things without any compromises.
We like to do only real things and things that we dare to call our own.
Anyways, this was the history of the Fatalii Gourmet Naga Morich -face. And a small, but important part of the Fatalii Gourmet ideology and history.

I started the seeds the same year and was very excited to see and taste the results. After the plants started producing the first pods, I started tasting them when they were still immature.
It was immediately clear to me that this was definitely one of the hottest and the best tasting chile peppers available. During the next years I started breeding the Naga and selected the tastiest and the hottest pods every season to make sure it would get better as the time goes by.
Now, after breeding Naga Morich for several years, the results were clear, it had improved a lot since I first tasted it.
The Fatalii Gourmet Naga Morich was born! Fatalii Gourmet Naga Morich was the first "Hottest chile pepper in the world" brought to ordinary grocery stores as fresh pods available for everyone. It still stays there as the the king of hottest chile peppers because of it's astonishing delicacy!

As the matter of fact. Fatalii Gourmet was the first company to bring the Naga Morich available commercially as it did with some other great Chile pepper varieties. People gathering at chili fest 2011 to follow the Naga eating competition.
And most definitely, those were Fatalii Gourmet Naga Morich pods. The taste has so much more body, sweetness and even so much more the powerful, classic aroma of the original Naga Morich.
The original Naga Morich was quite good already and it gave a good base to develop both, the taste and heat level.
I knew that the taste could be enhanced greatly by breeding to make it much aromatic.
The profile of the heat needed some developing too, so we chose the pods with the most delay with the heat level.
By splitting Fatalii Gourmet Naga Morich pod and smelling the pod you can immediately tell that the taste will be absolutely great, no doubt about it.
The fruitful aroma makes your mouth water and you want to dig your teeth into the scorching pod immediately.
It will surely be horrible mistake as you realize after the heat level has risen. Clients, (which are food-industry professionals here in Finland) are with us in the greenhouse tasting the bred Fatalii Gourmet Naga Morich.
As you can see, sometimes their great taste makes you taste too much at once!
Indeed, one of the great qualities of the Naga Morich is the delay with the heat. We have been improving that factor a lot all these years. Fatalii Gourmet Naga Morich, besides it's absolutely full, fruity delicious taste, has a heat profile which starts very subtly and raises and raises until it's a hell in your mouth. It all happens little by little which makes it comfy even it's a hellish ride in the end. One of the great things about Fatalii Gourmet Naga Morich is the versatility. Nagas picked green, just before ripening have totally different taste and heat level. The taste is very sharp, more fresh and less sweet than the red, mature version. The heat level is also completely different, it hits immediately, like a hot knife in your tongue, almost like completely different chile pepper! When Fatalii Gourmet Naga Morich has been smoked and dried, the properties of the stunning taste combined with the smoky flavor will form a completely new product which a taste of it's own. 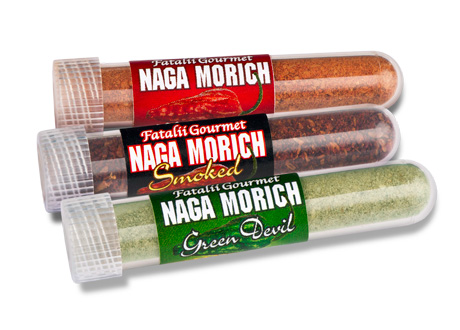 The Method for growing and breeding

The method chosen for growing and breeding Fatalii Gourmet Naga Morich was easy to choose: hydroponics where the nutrient ratios could be adjusted perfectly for the plants depending on their growing stage. Here's one of the rooms for larger-scale growing and breeding. And some Fatalii Gourmet Naga Morich -results from the same room.

This is especially important at the producing stage because with traditional growing excessive nutrients such as nitrogen affect the taste of the pods a lot. With hydro growing the nutrients can be adjusted of the absolutely perfect taste which brings only the best qualities of the taste available for you to enjoy.
Hydro growing and breeding also makes it possible to grow insanely large pods: The continued breeding in hydroponic systems inside the greenhouse in Finland has affected the taste during the years breeding process.
The ideal conditions and nutrients ensured the perfect qualities of the legendary Fatalii Gourmet Naga Morich.

All the breeding and growing of Fatalii Gourmet Naga Morich has been done without chemical pesticides.
Only biological methods have been used to prevent pests. The pollinating is done with the help of bees. Despite all this talk about the one of the hottest peppers in the world it's a good thing to remember that Fatalii Gourmet Naga Morich was bred to be the TASTIEST hot chile pepper there is.

When handling fresh pods or even powders, it's a good idea to use gloves to prevent the capsaicin from touching the wrong parts of your body. As Capsaicin is oil soluble, use cooking oil to clean your hands and cooking tools after using them with Fatalii Gourmet Naga Morich.

After all these years of continued breeding, were very excited to grow it once again next year! Our overpowering version of the Naga Morich will be seen as a part of the many great hot products that are and will be available in the near future.

In Finland, people are lucky enough to get their hands on Fatalii Gourmet Naga Morich products thru our webshop: https://fataliigourmet.net